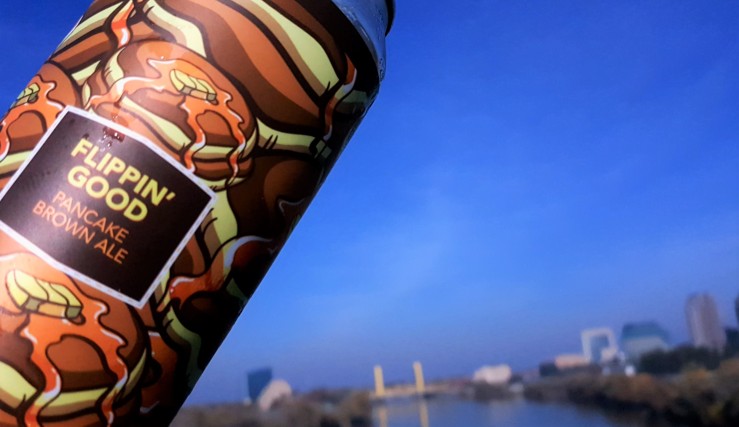 Craft beer is booming in Sacramento, California and the nation! According to the Brewer’s Association, craft beer has grown to 4.2 times its 2004 size in the ensuing twelve years. Board of Equalization data acquired by Sacramentality shows that California was ahead of the curve so has grown a little slower to 3.5 times its size, although that drops to 2.7 times if breweries recently purchased by macro conglomerates are omitted.

Sacramento (represented by a Kings flag, both because the current flag needs replacing and because the data represents the metropolitan area, not just the city) was hit hard by the recession, dropping to 2/3 its 2004 size by 2009 and growing slowly through 2013, but has exploded since, more than tripling in the last four years. We will delve deeper into the local brewing numbers in a subsequent piece, but the decline was caused almost entirely by Sacramento Brewing Company’s descent into oblivion.

Craft brewers are not the only ones brewing in California. Driving over the causeway, you’ll see a prominent billboard with the good folks of Anheuser-Busch pointing out that Bud Light, despite its strong association with St. Louis, MO is brewed in California.

Perusing Board of Equalization data, we see that this is true. Very, very true. 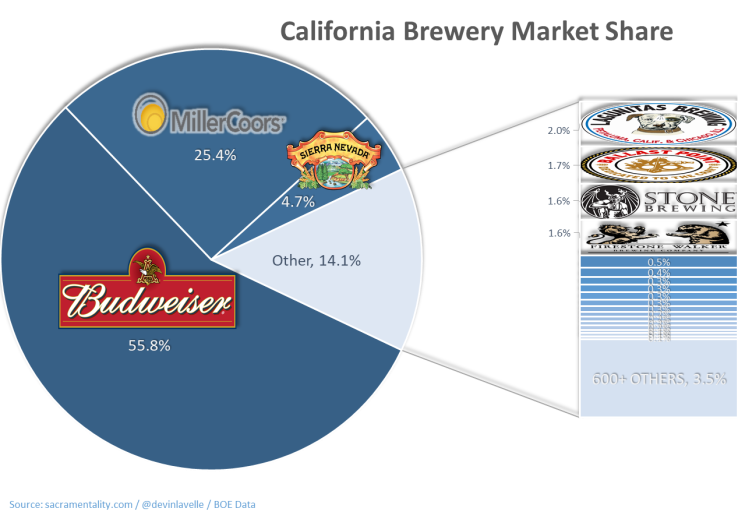 Most (56%!) of the beer accounted for in the Board of Equalization Beer Manufacturer Tax Reports (provided graciously by BOE staff, thank you for that) was brewed by the good folks at everyone’s favorite Belgo-Brazilian mega-conglomerate, Anheuser-Busch InBev. Add in South African-Canadian-American mega-brewer, MillerCoors and the macro brewers collectively top 80 percent of California’s locally produced beer. Budweiser tops 400 million gallons, while MillerCoors hovers around 190 million gallons. While the macro brewers continue to dominate the shelves, their numbers have been slipping, leading the big guys to take a ‘if you can’t beat’em, join’em’ approach. 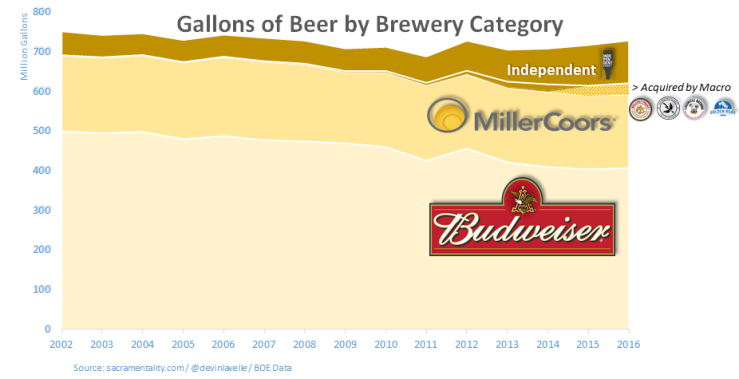 With so much of California’s craft brewing consolidated in a handful of its largest breweries, it is not surprising that its brewing is largely consolidated in five regions: 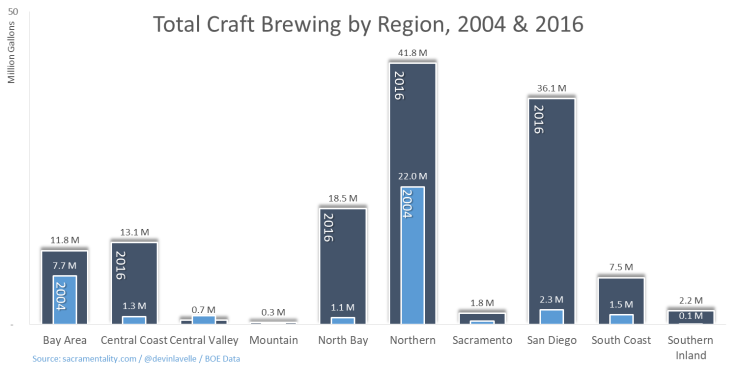 Today, Sacramento remains among the smaller brewing regions, but that may soon change. Our region has been the fastest growing since 2011, increasing production by more than five times over. Check back in a few weeks and we will delve into and celebrate the enormous growth Sacramento’s brewing scene has experienced the last several years. With great breweries like Moonraker, New Glory, New Helvetia & Mraz continuing to push the envelope, an expansion announced by Device, recent newcomers including Flatland and Claimstake beginning to tickle our taste buds, highly anticipated openings in the New Year in Urban Roots and Moksa and larger, established breweries like Track 7 and Knee Deep, I think we can all agree that Sacramento’s brewing scene is Flippin’ Good!